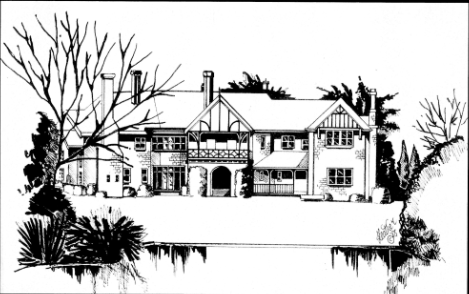 Image courtesy Leo Keegan (Drusilla 63)
In September, 1836, Major Thomas Mitchell, the NSW Surveyor-General, and famous explorer of Victoria, climbed a mountain from which he hoped to see across the volcanic plain to the south, and the waters of Port Phillip and Western Port. From the top of this mountain, which he named after Philip of Macedon (father of Alexander the Great for whom he had great admiration), he was enthralled by the beautiful panorama of the plains to the south.
..
At the foot of this mountain (1013m high), lies "Drusilla" residence of the Grimwade family and the training centre for the Marist Brothers (1948 till 1976).
..
In the 1880's Johanna 'Madam' Weigel, of pattern and fashion fame, began the laying out of what was a beautiful property of approximately 14 hectares. She planted the large oak trees, now over 100 years old, which graced the front and northern sides of the present building. Her house was between the oaks. The property was next owned by a Mrs Murray, who had extensions made to this building. But in the mid-1920's, the house was destroyed by fire caused by faulty electric wiring.
..
The location was bought by (Edward) Norton Grimwade and his wife, Phelia Maude. He was the eldest son of Frederick Grimwade who in 1867 co-founded the firm "Felton, Grimwade & Co" with Alfred Felton (of Felton bequest fame). This company was the largest chemical importers in Australia and also held many shares in ICI Australia and Australian Fertilisers. The Grimwades were one of the many millionaires who bought beautiful properties and built mansions in the Mount Macedon area, so making it a picturesque garden area. Some of these property owners included: David Syme of the "Age"; Nicholas of "Aspro" fame; Essington Lewis - BHP managing director; G. J. Coles; Cameron - the tobacco importer; and Arthur Rylah - politician and lawyer. It was Cameron who had the Memorial Cross erected during World War 1 as a war memorial - his son had been killed in action.
..
Mrs Phelia Maude Grimwade commissioned architects Godfrey and Spowers of Melbourne to draw up the plans for "Drusilla" in February 1931. The Great Depression allowed them to obtain highly talented craftsmen and the best of materials rather cheaply. Hence the beautiful rosewood panelling, the wrought iron work, the unique chimney stacks, the leadlight windows, the cedar venetian blinds, the Flemish carved panelling above the fireplace in the main hall, and the chandlier. The woodwork and brickwork were outstanding. Mrs Grimwade was an arthritic cripple so the lift was installed for her sake. The Grimwades employed about a dozen men including gardeners, butler, chauffeur and five maids, and entertained on a lavish scale.
..
The Queen Anne style mansion was furnished on a similar lavish scale with picturesque and beautiful objects of art acquired in England and Europe, and from many of the important Australian collections.
..
World War 11 brought about a big change at "Drusilla". Servants joined up and so the Grimwades in 1942 had perforce to close up the mansion and live in one of the three cottages previously used by some of the servants. Mrs Grimwade died in 1943, as did the spaniel "Della" buried under the Japanese lilac with a marble, lead engraved tombstone near the front gate. Mr Grimwade died shortly after in 1945, so the executors of their estates and trustees sold the property, the antiques, furnishings and works of art by auction beginning on Saturday 24th November 1945 and continuing through the week until Monday 3rd December. Special trains ran from Melbourne for the auction. The building had cost thirty-nine thousand five hundred pounds in depression times, and the art collection was invaluable.
..
The "Kyneton Guardian" of 27th November 1945 has this par: " The Marist Brothers have bought the estate of the late Phelia Maude and (Edward) Norton Grimwade, the well known Macedon Mountain mansion "Drusilla" for fourteen thousand seven hundred pounds. Brother Andrew, the Australian Provincial, negotiated the purchase".
..
Various caretakers were in charge of "Drusilla" till July 1947. Then Brothers Flavian and Eusebius undertook to prepare the mansion as a training centre. It was during their time that they had the back stairs built and the underground concrete tank installed to collect rainwater, along with many other improvements.
..
The Marist Brothers used "Drusilla" as a training centre from 1948 until 1976. It then was used as a Retreat Centre until it was sold to private enterprise in late 2003.
Posted by Terry at 10:59

See Blog Menu below: 1.Click on the heading (post) you wish to view. 2. Double click on image/text to enlarge.... 3. Use back arrow to return to blog menu. {Photo courtesy: Peter Lawler (Drusilla 51)}

Terry
Born to Albert and Laurel OBrien in 1936 at Parkes NSW. My siblings: Pamela, Peter (RIP - 2020), Antoinette, Simon and Joseph. Did Primary schooling with the Mercy Sisters and Marist Brothers in Parkes. Attended Drusilla 1949 till 1953. Did Novitiate in Mittagong, then taught as a Marist at Camberwell, Bendigo,Broken Hill, Somerton, Bunbury (Principal - 6 years), Warragul (Principal - 4 years), and Mt Gambier. In 1974 married Jenny and have three sons Justin, John married Hayley (grandson Ethan 2017) and Tim married Charlaina (grandchildren Juliette 2006, Williem 2007). Taught as a lay person in Marist schools at Hawthorn, Floreat Park (Deputy Principal - 4 years), and Mitchell Park (Deputy and Principal - 10 years). Consultant at Catholic Education Office, Adelaide beginning in 1991 in Religious Education then in Building and Planning. Retired in 2001 after forty seven years in Catholic Education,of which thirty three years were spent in Marist schools.